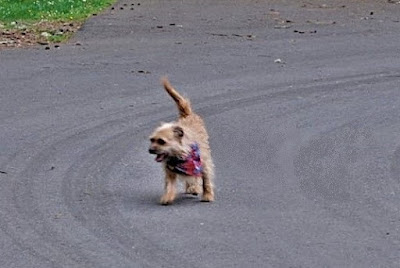 If anyone is to blame, I am. Poor choices always catch up with you.

Intent on removing and cleaning the dryer vent by our back door,  I completely forgot about the door, leaving it slightly ajar. Scruffy needed no other invitation –in the blink of an eye, he was out the door. As I saw him edging past me at a  safe distance, I held out my hand and called him, knowing even then it would make no difference whatsoever.

Scruffy is our small rescue dog of undetermined lineage, although we’re sure he has a lot of border terrier in him. We were warned when we adopted him, he is an escape artist, and so we keep a close eye on him and never let him outside without being on a leash. Things sometimes happen and this was one of those times.

True to his instincts, Scruffy becomes totally blind and deaf to us when he’s laser-focused on his mission - following his nose to explore the world and water every pole, shrub, or blade of grass he comes across. Squirrels, rabbits, and rats BEWARE!!

I caught a glimpse of his little bowlegged rear end, tail straight up, trotting rapidly up the driveway and onto the road. My husband started the truck and honked the horn, thinking Scuff might come back, as he loves rides. No such luck – he was bound and determined to take full advantage of his newfound  freedom. Hubby drove off, following him up the road to the intersection with Clear Creek Road. Scruffy rounded the corner and kept right on going. Our biggest fears are that he will someday end up lost or dead on the road. I doubt he has the foggiest idea where he’s going, nor how to get home again. This was not our first rodeo…

Several weeks earlier, Scruffy had pulled the same stunt. I took out after him on foot. His route then was much the same and when I reached Clear Creek, he was well up the road. Walking as fast as I could and loudly calling his name, I must have drawn the attention of a pleasant young woman who stopped to offer help. She quickly learned he doesn’t take well to strangers, so said she’d drive ahead and try to stop his progress to give me some chance of nabbing him. It took a bit of time, but that worked, and this wonderful person drove us both home.

I have learned these kinds of angels often appear out of nowhere to help and during this more recent episode, that again happened. First, a UPS driver saw Scruffy in the middle of the road, so pulled over. Seeing Hubby in pursuit, she got out and tried to help, but quickly saw the futility of that, so left. Her efforts, however, caused the little stinker to leave the road and trot up a driveway. There, a woman came out of the house and, appraising the situation, diverted Scruffy’ s attention just long enough for Hubby to grab him, toss him in the truck, and transport him safely home. 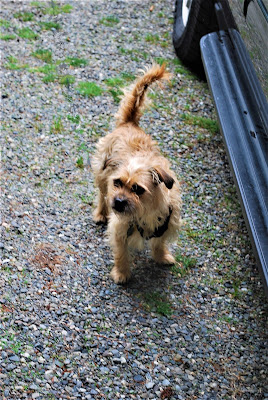 I would describe Scruffy as “lovingly obstinate” and have to admit to being grudgingly in awe of that. Don’t we all wander off the beaten path at times, away from safety and the known? Pulled forward by some unlikely incentive, we are propelled onward by confusion, frustration, anger, or mere  hubris. Wandering into unknown territory, we become lost with no idea how to return to what we know. But just as often, “helpers” appear seemingly out of nowhere to divert us, help, or offer alternatives, until—one way or another—we are gently scooped up and carried home.

No temptation has overtaken you that is not common to man.

God is faithful,
and he will not let you be tempted beyond your ability,

but with the temptation he will also provide the way of escape,
that you may be able to endure it.
~ 1 Corinthians 10:13

PLEASE do not repost or reproduce anything from my blog without my permission. It's all protected by copyright. And DO NOT PIN ANYTHING FROM MY BLOG TO PINTEREST!

WELCOME! The seasons roll on... and so does life. Enjoy these observations and experiences from the everyday journey.

Feel free to leave comments - if you are unsure how to leave a comment, simply choose the "anonymous" option. You can sign your name at the end of the comment if you want.

Ladybug
I am a life-long learner, with a multitude of interests - naturalist, artist, teacher, writer. I believe we each have a uniqe view of the world and I enjoy sharing mine. We each have particular gifts and a purpose for being - it is our job to find, develop, and share those gifts. My home is whereever I am, but my heart will always be in Montana. I have sky in my soul, space in my heart... Each day offers new challenges AND opportunities; I prefer to look for the good in others.

View my complete profile
Unless otherwise noted, ALL writings and photographs on this site are original works by the author and, as such, are protected by all applicable copyright laws.

“...it does not matter if we are forgotten; what matters is the effect we have on those around us and those who come after us. What matters is how our own lives affect the larger, perpetual community of the living.” ~ Lynn Schooler

"Men go abroad to wonder at the heights of mountains, at the huge waves of the sea, at the long courses of the rivers, at the vast compass of the ocean, at the circular motions of the stars, and they pass by themselves without wondering."
~ Saint Augustine