Art is truly where you find it, and so much more can be gleaned from it than simply its visual appearance and impact. History, culture, ethics, and human justice are only a few of the thoughts stirred in my mind as we traveled through So. Montana and NW Wyoming around the edges of Yellowstone Park. 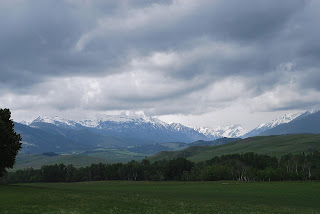 The Crow Indian nation once ranged from the Three Forks in Montana to the Black Hills of South Dakota, from the 500 mile long Musselshell River in central Montana to the Big Horn Mountains in northern Wyoming. The rivers tumbled cold and unobstructed with numerous species of fish, fresh water mussels, and crawdads. 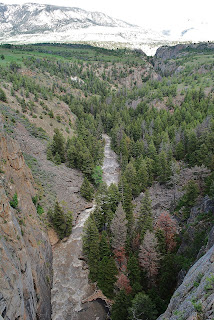 Within these wild drainage basins lived the last survivors of the great Northern Buffalo herds - countless millions roamed north from the Yellowstone River to the Saskatchewan grasslands. When the Crow people lived in the area that is now Red Lodge, Montana, it was a place of worship, food and protection. Born in 1848, Plenty Coups (Aleek-chea-ahoosh, meaning "many achievements") was a man of war - and then a man of peace. Possessing vision, bravery, and leadership, he was made a chief of the Apsáalooke (Crow) tribe by age 28 and helped bridge a gap between two cultures. In 1884, he became one of the first Apsáalooke to own and settle on a farm, which was deeded to him through the federal Indian Allotment Act. On his 320-acre tract, he opened a general store, built a home, and worked the earth until his death in 1932 at age 84. At his request, 195 acres of his land was made into a public park. Upon his death, the Apsáalooke people voted to designate him as their last traditional tribal chief.

"The buffalo gone and freedom denied him, the Indian was visited by two equally hideous strangers, famine and tuberculosis. He could cope with neither. His pride broken, he felt himself an outcast, a beggar in his own country. It was now that Plenty Coups became the real leader of his people."

From the book Plenty-coups: Chief of the Crows
by Frank B. Linderman

"All my life I have tried to learn as the chickadee learns, by listening, profiting by the mistakes of others, that I may help my people. I hear the white man say there will be no more war. But this cannot be true. There will be other wars. Men have not changed, and whenever they quarrel they will fight as they have always done... 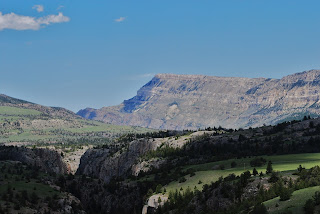 ...We love our country because it is beautiful, because we were born here. Strangers will covet it and someday try to possess it as surely as the sun will come tomorrow. Then there must be war, unless we have grown to be cowards without love in our hearts for our native land. And whenever war comes between this country and another, your people will find my people pointing their guns with yours. If ever the hands of my people hold the rope that keeps this country's flag high in the air, it will never come down while an Absarokee (Crow) warrior lives." ~Chief Plenty Coups 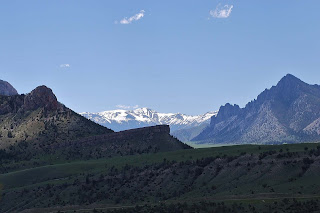 For generations untold, Indian war parties and hunting parties regularly climbed over the pass between southern Montana and northern Wyoming. They moved through the basin in search of fight and food. Buffalo, elk, deer and other migratory animals swarmed in vast numbers throughout the valley and far out onto the plains and rolling, treeless open country with the red soil and sweeping green hills. 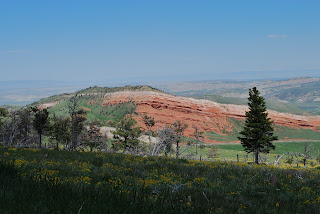 In the mid-19th century, the Nez Perce people splintered into two groups, with one side accepting coerced relocation to a reservation and the other refusing to give up their fertile land in eastern Washington. Following the Big Hole battle of 1877 near Lost Trail Pass on the Montana-Idaho border, Chief Joseph and his band of 800 men, women, and children began an epic struggle. This country helped hide them as they slogged through Sunlight Basin and over Dead Indian Summit in their attempted 1,800-mile escape from the pursuing 2,000 strong U.S. Cavalry. 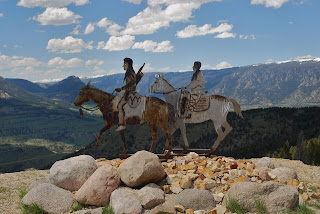 The Nez Perce fought a cunning strategic retreat, including 13 battles, toward refuge in Canada. On October 5, 1877, Chief Joseph surrendered to units of the U.S. Cavalry near Chinook in the north of what is now Montana - a mere 40 miles from the border. This surrender marked the last great battle between the U.S. government and an Indian nation.


"Hear me, my chiefs, I am tired.
My heart is sick and sad.
From where the sun now stands, I will fight no more forever."
~Chief Joseph 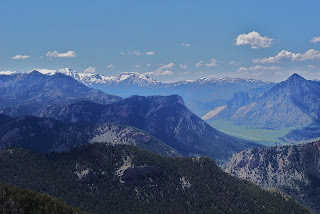 Experiencing this spectacular land gives one a deeper understanding of the plight of the early Native Americans. The flight path is reproduced by the Nez Perce National Historic Trail. One part of that, the Chief Joseph Scenic Highway, goes across the canyon of the Clarks Fork of the Yellowstone River, Wyoming’s only designated Wild and Scenic River. With winding switchbacks to the top of Dead Indian Summit, this drive is absolutely breathtaking. The 220-degree view from this point is among the most dramatic in the West and is a major attraction along this Byway. There are various legends for the origin of "Dead Indian"; with skirmishes between early prospectors or the U.S. Army and a party of Indians in 1878, one of the Indians died and was left at the summit. 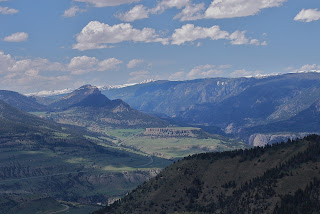 Not far from there, in Cody, Wyoming, we viewed a number of other outstanding bronze sculptures. 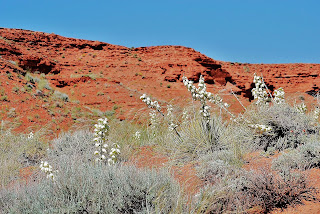 In the valley of the Little Bighorn River in June of 1876, more than 260 soldiers and attached personnel of the U.S. 7th Cavalry met defeat and death at the hands of several thousand Lakota and Cheyenne warriors.

A proud man with deep seated political ambitions and a ruthless reputation, General George Armstrong Custer laid the ground work for his own defeat. Before going into battle against an unnumbered foe, he reduced his forces thinking it would bring more glory, praise, and credit his way to achieve a victory with fewer men. Against the advice of his Indian scout, he marched his men all night. Fatigued by the long march, the men and horses were no match for the waiting Sioux warriors. The Sioux carried away the swallow-tailed flag of the Seventh Cavalry that was captured during that battle. 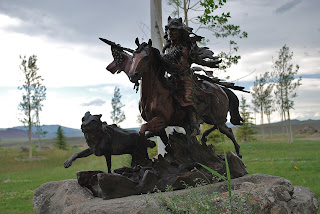 Thunder at Little Big Horn
Vic Payne
After the defeat of General Custer, a small band of renegade Sioux headed north for the Canadian border with the Seventh Cavalry flag flying as a testimony to their victory over the “yellow hair”. The carrier of the flag, depicted here, and his wolf companion, proudly fly the colors of their fallen enemy. Later this small band of Sioux warriors was overtaken and the flag was retrieved. It is currently on display at the Custer Battlefield Museum located at the site of the battle in Montana. 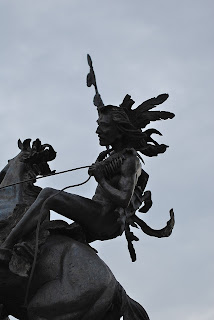 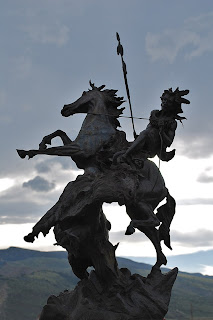 Young Indian boys were often named after the animal whose strength and protection their parents wished upon them. Observing his namesake, the child would learn its ways and emulate its strengths. There was, however, always the danger that the young warrior would meet his end through his spiritual brother, the mighty buffalo.

Oglala Sioux Indian chief Crazy Horse was born c 1842, near present-day Rapid City, S.D. Fighting against removal to a reservation in the Black Hills, in 1876 he joined with Cheyenne forces in a surprise attack against Gen. George Crook; then united with Chief Sitting Bull for the Battle of the Little Bighorn. In 1877, Crazy Horse surrendered and was killed in a scuffle with soldiers. 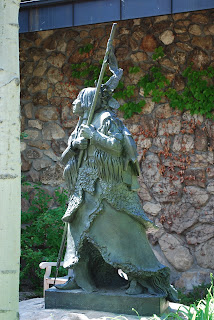 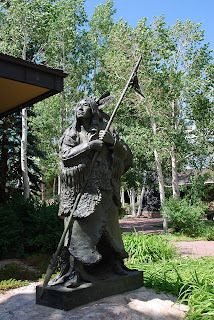 The artist admires the visionary leader and legendary warrior. He says “Crazy Horse is an American hero. He did not fight for the American flag, but he did lay down his life for the land we call America.”
In 1800, when she was about 12 years old, Sacagawea was kidnapped by a war party of Hidatsa Indians - enemies of her people, the Shoshones. She was taken from her home, in today’s Idaho, to the Hidatsa-Mandan villages near modern day Bismarck, North Dakota. She was later sold as a slave to Toussaint Charbonneau, a French-Canadian fur trader, and gave birth to her son Jean-Baptiste in 1805. Soon after, she and Charbonneau traveled with, and she served as interpreter for, Lewis and Clark’s Corps of Discovery. Only in her teens, she helped with this historic expedition in more ways than we know. 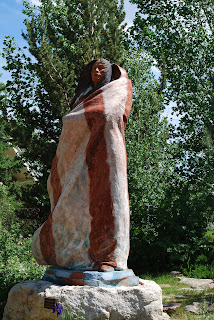 Here she is portrayed with her young son standing majestically in the blowing wind. The artist created a unique finish on the sculpture by painting it many colors. 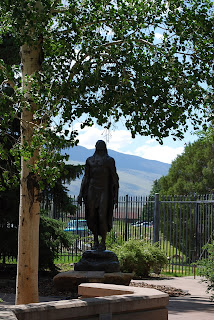 This dramatic and emotional Plains Indian medicine man stands in reverent prayer. The artist modeled the sculpture after he witnessed a “medicine man, or counselor of the tribe, make his prayer. It was for the return of the buffalo.” 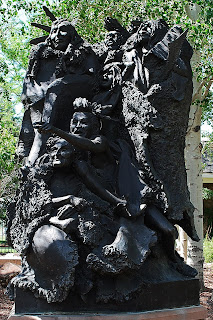 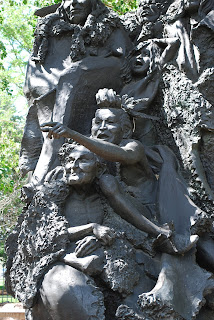 This scupture portrays several Plains Indians looking with wonder into a vast unknown world. This mysterious sculpture leaves its interpretation to the eyes and mind of the beholder. How would YOU interpret it?

PLEASE do not repost or reproduce anything from my blog without my permission. It's all protected by copyright. And DO NOT PIN ANYTHING FROM MY BLOG TO PINTEREST!

WELCOME! The seasons roll on... and so does life. Enjoy these observations and experiences from the everyday journey.

Feel free to leave comments - if you are unsure how to leave a comment, simply choose the "anonymous" option. You can sign your name at the end of the comment if you want.

Ladybug
I am a life-long learner, with a multitude of interests - naturalist, artist, teacher, writer. I believe we each have a uniqe view of the world and I enjoy sharing mine. We each have particular gifts and a purpose for being - it is our job to find, develop, and share those gifts. My home is whereever I am, but my heart will always be in Montana. I have sky in my soul, space in my heart... Each day offers new challenges AND opportunities; I prefer to look for the good in others.

View my complete profile
Unless otherwise noted, ALL writings and photographs on this site are original works by the author and, as such, are protected by all applicable copyright laws.

“...it does not matter if we are forgotten; what matters is the effect we have on those around us and those who come after us. What matters is how our own lives affect the larger, perpetual community of the living.” ~ Lynn Schooler

"Men go abroad to wonder at the heights of mountains, at the huge waves of the sea, at the long courses of the rivers, at the vast compass of the ocean, at the circular motions of the stars, and they pass by themselves without wondering."
~ Saint Augustine